On June 30, President of the Republic of Uzbekistan Shavkat Mirziyoyev chaired a videoconference on ensuring justice and countering corruption.
Over the past three years, more than 20 laws, decrees and resolutions have been adopted on these priority issues. As a result of reforms, the courts have so far acquitted 2273 persons. In addition, more than 3500 young people and women who committed crimes through negligence were taken under the guarantee of makhalla, public and released from prison. Sixty law enforcement officers were prosecuted for human rights violations.
It was noted that such changes strengthen the faith of our people in the triumph of truth and justice. However, it is too early to say that our people are satisfied with judicial and legal system.
It was emphasized that the recent tragic events in internal affairs bodies of Andijan and Chirakchi districts should wake up the system’s leaders and encourage them to draw concrete conclusions. At present, eleven internal affairs officers involved in these crimes have been called to account, 7 managers have been dismissed and 16 more have been brought to disciplinary responsibility.
The public openly declared cases of injustice in this direction during the dialogue with people at places held by parliamentary groups led by heads of the Chambers of the Oliy Majlis.
Based on this experience, deputies and senators will continue to hold regular dialogue in their constituencies on issues of ensuring justice and fighting corruption, involving judiciary, sector leaders and public.
Cases of injustice and problems expressed by the population will be critically discussed quarterly in local councils, followed by raising specific issues before responsible persons and evaluating their activities.
Profile committees of the Oliy Majlis will maintain a rating of justice and corruption situation in each region, and at the end of each half-year will conduct parliamentary hearings and inspections.
National Center for Human Rights, Ombudsman and Tashkent State University of Law are charged with organizing training for senior law enforcement officials in special training module “Human honor and dignity – the highest value”.
It was noted that the quality of investigation and qualification of investigators do not meet the requirements. For example, in the first 5 months of this year, the courts acquitted 323 citizens against whom the investigative authorities brought unsubstantiated charges, as well as excluded unsubstantiated charges against 1854 people. Last year, the state paid 6.7 billion UZS of material and moral damages to 236 acquitted persons.
As is known, the competition for the position of a judge has been toughened by establishing such requirements as the presence of a certain work experience, graduation from High School of Judges.
The need for establishing similar requirements for investigator candidates was noted at the meeting. In particular, a number of responsible agencies were entrusted to create the Institute of Investigation, to develop completely new requirements for the profession of an investigator, to introduce advanced experience and standards in this sphere.
Another important issue is that law enforcement agencies are violating the jurisdiction of cases. In particular, there are certain types of crimes that can be investigated by any investigative body, and jurisdiction of certain articles to a particular investigative body is not specified in the law.
In addition, in 2018-2019, 307 people were acquitted by courts of first instance in 192 criminal cases. Prosecutors did not drop charges in any of these trials. In this regard, it was noted that it is necessary to introduce a procedure under which the prosecutor, without waiting for completion of trial, will refuse to charge on his own initiative, if during the trial errors of investigation are revealed.
“Everyone who comes to a courthouse should leave with confidence that justice triumphs in Uzbekistan. This is the President’s demand!” - said the Head of the state.

In more than 8 thousand or 44 percent of appeals received this year, the applicants complained of incomplete and biased consideration of cases in the courts, delays in consideration.
Another example. In 2019, more than 2.5 thousand or 44 percent of cases considered in economic courts in the order of appeal, cassation and supervision were canceled or changed. This indicates that in one of two cases, the decisions of district and regional economic courts are changed after consideration by a higher court, which is why entrepreneurs and investors suffer in terms of time and costs.
Responsible persons were instructed to review the judicial system based on best practices and international standards on “one court – one instance” principle.
Judicial practice “supervisory review”, which is outdated and the very name of which does not correspond to the essence of justice, will be completely discontinued.
President Shavkat Mirziyoyev forwarded a proposal to eliminate all factors that affect the court’s fair decision, including the right of the Chairman of the Supreme Court and Prosecutor General to protest. Houses of Parliament will consider this proposal.
It was emphasized that the decisions taken by courts should be based only on the evidence examined during the trial. It was noted that some judges are fixated on materials of investigation, and this discredits the law, judiciary and state. It was stated that justice should be carried out in the eyes of people, openly and transparently, in the name of justice.
The Head of the state also touched upon the issues of creating convenience for residents of certain districts and cities while applying to the court. For example, in Urgut, one of the most populated districts (500 thousand residents, 102 makhallas), there is no civil court, so citizens have to travel 80 kilometers to get to Taylak inter-district court.
In this regard, instructions were given to optimize courts and their activities.
Private property must be protected by the law and courts.
Over the past year and a half, the courts have overturned 1730 decisions of khokims on land allocation, demolition and privatization of buildings and structures.
In a thousand cases, the rights of citizens and entrepreneurs related to land relations were restored through courts, in 51 cases – in connection with demolition, in 62 cases – regarding privatization.
The need for cancelling the review of results of privatization, and in general – preventing state agencies from taking such an initiative, which should be fixed by law.
It is necessary to strengthen guarantees of land rights and strictly define that the issue of cancellation of property rights can only be resolved in court, said the President.
It was emphasized that khokims of regions, districts (cities) and heads of all sectors are required to ensure strict compliance with these requirements in their territories.
“Please understand one thing – an investor who is going to invest money, pays attention first of all to how guaranteed is the judicial protection of his rights. Let the leaders understand: no one has the right to interfere in the activities of a court”, said Shavkat Mirziyoyev. 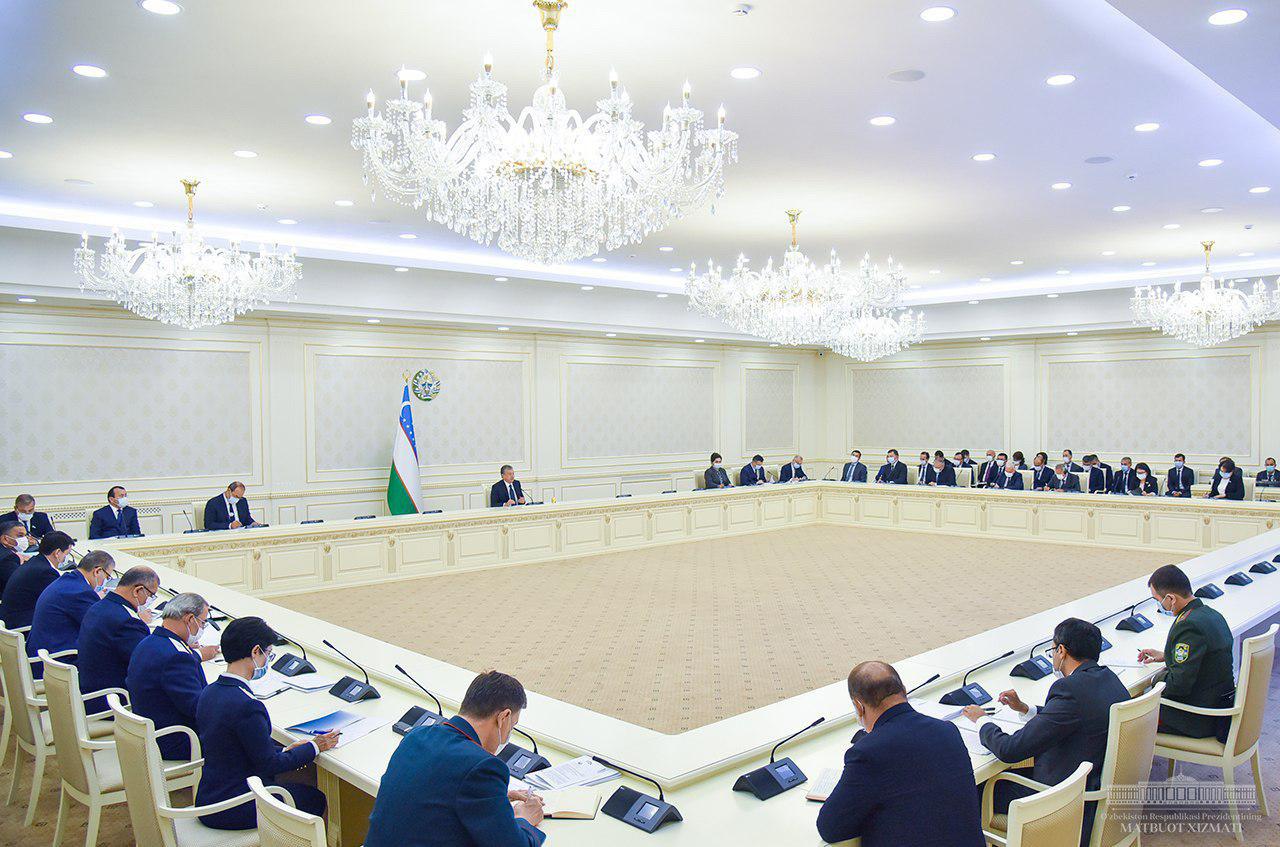 A draft law will be developed to strengthen the responsibility for obstructing activities of a judge and forcing him to make an unfair decision.
Advocacy is an integral part of achieving justice, and the role of this institution in ensuring justice is invaluable.
There are about 4 thousand lawyers in Uzbekistan, on average there is one specialist per 8,5 thousand residents of the country.
Moreover, 43 percent of lawyers work in Tashkent, and no law firms are registered in 20 districts of regions.
It was noted that it is necessary to cancel the requirement of two-year legal experience to start legal practice and introduce the procedure for students to practice as a lawyer's assistant. In the future, law schools will train undergraduates in advocacy specialty.
Due to the lack of a transparent procedure for selecting lawyers provided by the state, there are cases when some investigators call lawyers they know to accused and pressured. So, last year in Tashkent, out of more than 7 billion UZS allocated by the state to lawyers, half was paid to 20 law firms (a total of 746 such firms operate).
In this regard, relevant ministries have been instructed to launch an electronic system for selecting lawyers who provide legal assistance at public expense. First, the system will be implemented as an experiment in the capital.
It was also emphasized that participation of a lawyer should also be mandatory in the cases of persons accused of committing particularly serious crimes, as well as while considering application of a preventive measure in the form of detention or house arrest.
A package of legislative acts aimed at increasing the attractiveness of advocacy and strengthening the protection and guarantees of lawyers’ rights will be developed and submitted for discussion.
Widespread introduction of digital technologies in the judicial system is a requirement of today. The task was set to introduce a single set of Adolat information systems in the Supreme Court by the end of the year.
This will allow to apply to the courts electronically, monitor the status of appeals online and send information to the parties electronically.
It was emphasized that this year the courts should be provided with 100 percent videoconferencing.
The next important issue on the meeting's agenda was anti-corruption reforms.
It was noted that 143 types of public services were transferred to an electronic form, and in 35 departments the number of required documents and time for receiving services decreased by 2 times. The principles of openness and transparency have been introduced into the process of budget expenditures, public procurement, purchase and sale of land, buildings and structures.
As is known, on June 29, the President of the Republic of Uzbekistan signed a decree on establishment of Anti-Corruption Agency.
The Agency together with heads of industries and regions will have to carry out the following tasks.
First, khokims of all regions, districts (cities) in their territories, and heads of industries – in their systems, will develop No Corruption Program together with the Agency within a month. The main task will be to ensure openness and transparency, as well as digitalization of activities.
Second, effective parliamentary and public control over the prevention of corruption will be established. In particular, the Agency will analyze the state of anti-corruption work and annually submit a national report to the President and the Oliy Majlis.
It was also indicated that the Agency together with public, the media and other civil society institutions, should study the perception of corruption among the population and entrepreneurs, evaluate the activities of state bodies.
Third, in the fight against corruption, serious attention will be paid to the issue of personnel training. To do this, the Academy of Public Administration and Tashkent State University of Law will open a separate training module on the study of corruption, a special department and a master's degree program. Training courses will also be organized for senior personnel, especially khokims, to develop their knowledge and skills in this sphere.
Responsible persons provided information on the organization of implementation of tasks that were set at the meeting.

Responsibility and competence are the key to crime…

President Shavkat Mirziyoyev got acquainted with…